White sand shines brightly in the midday sunlight and reflects the heat of the sun.
However, when the excitement subsides and the noise quiets down in the evening,
the sand dunes get colored crimson at sunset, and when the sun goes down,
darkness covers Umanose the Horse’s Back in the dusk.
When you lie with your arms and legs sprawled out on the sand, the sea breeze makes you comfortable,
the Milky Way flows in the night sky, and the number of fishing lights on squid fishing boat glow on the horizon.
If you close your eyes in the silence, you will feel like your body blend harmoniously into the sand.

Summer when the blazing sun shines on your skin.

The season evokes all living things excitement and makes them feel lively.

During the twilight, the dunes shine in a flaming golden glow at sunset.

When the darkness covers, the number of fishing lights illuminate on the dark horizon.

The sight is fantastically beautiful and a special feature of summer in Tottori. 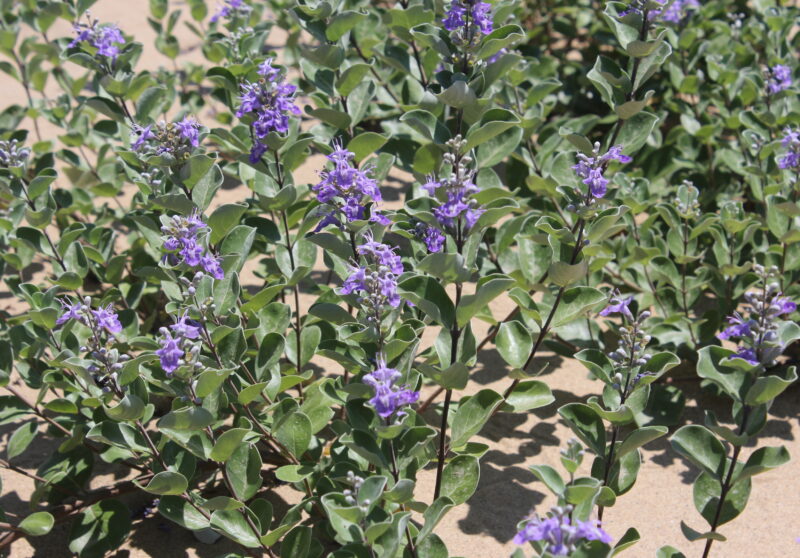 In around July, blue-purple flowers bloom in the sand dunes, and the refreshing scent of the aroma of its leaves float. 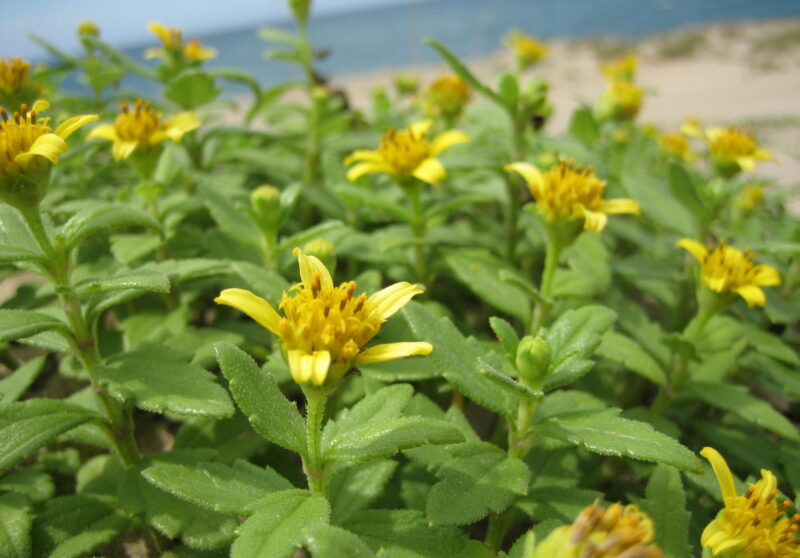 It blooms yellow small flowers near the sandy beach from summer to autumn.

There is also a name in Japanese, “cat tongue” from the fact that the leaves are rough like a “cat tongue”. 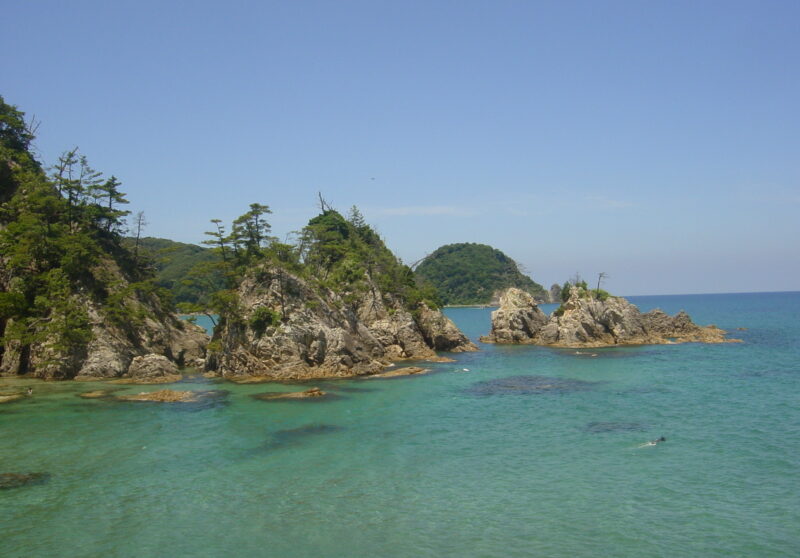 “Uradome Coast” formed from erosion by the raging waves and snowstorms of the Sea of Japan create a stunning contrast with white sand beach and green pines surrounded by a cape and crystal-clear seawater.

Also, it has been known as a scenic spot since ancient times and has been designated as one of Japan’s 100 scenic spots in 1927, scenic spots and natural monuments in 1928 and San’in Kaigan National Park in 1963.

In October 2010, San’in Kaigan Geopark, including the Uradome Coast, was certified as a member of the World Geopark Network and has been highly evaluated academically. 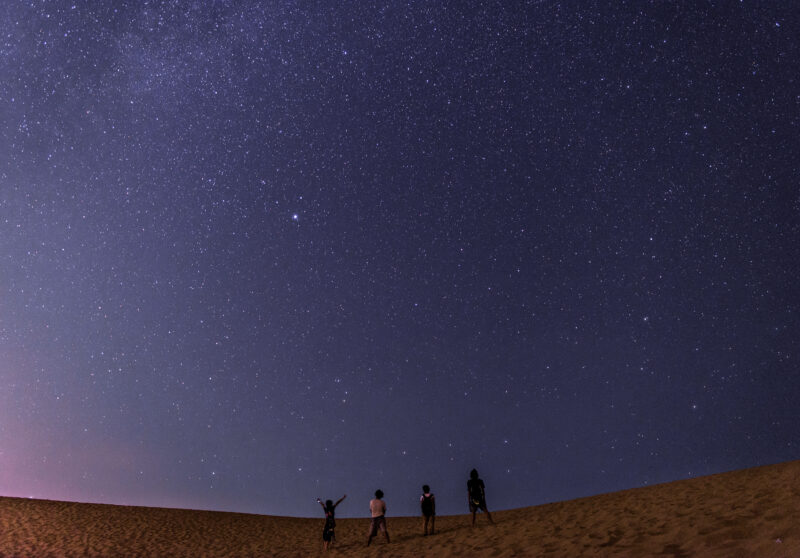 Star-filled night sky is one of the ways to enjoy the Tottori Sand Dunes, there is no lightings or obstructions.

On a day without moonlight, you can see the beautiful starry sky and the Milky Way. 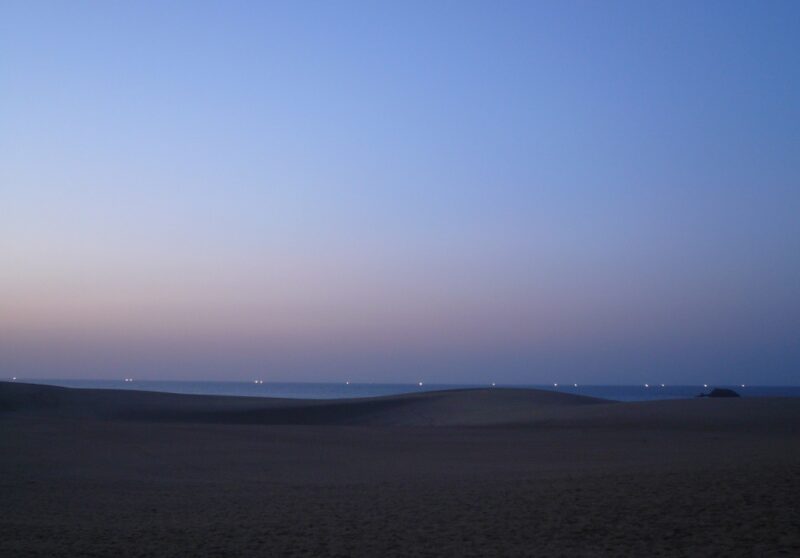 When the sun sets into the Sea of Japan, a number of firelight of the squid fishing boats appear on the horizon. 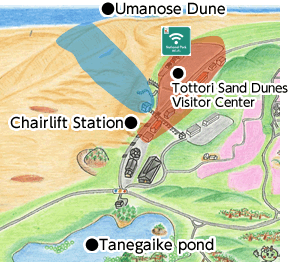 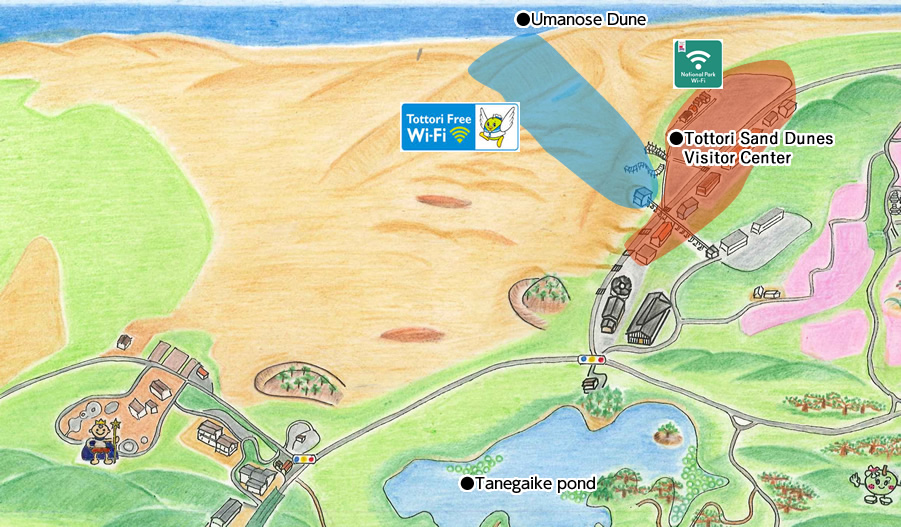 ‘Sand Graffiti’ or ‘Writing Messages’ on Tottori Sand Dunes are prohibited by ordinance.